There is no place like Binche, all over the world!

If you were to come across any local inhabitants, this is what you might hear. Claim that could be risky, yet, the small Belgian town, with little more than 30000 anime, has managed to carve out a small space in the collective imagination. Merit to be ascribed to its renowned Binche Carnival, an exceptional popular human and social event.

An event that has earned itself, in the 2003, the recognition of “Masterpiece of the oral and intangible heritage of humanity” by UNESCO.

What makes Binche Carnival truly unique is its originality and authenticity, which has always distinguished it, and the strong commitment of family companies. Some costumes are really unique and among the oldest and most original.

The Gilles they are the main characters of the Binche Carnival. They dance on the air of traditional carnival music, wearing wax masks. The Gilles of Binche come out only on Shrove Tuesday and have the obligation to respect certain rules. Among these, do not sit in public; do not move without the accompaniment of at least one drum player; being born in Binche … and other rules yet!

The Binche Carnival takes place over three days, culminating with the celebrations of the Fat Tuesday. But the ceremony is not limited to these three days alone. Six weeks before the Carnival, the preparatory holidays begin, during which there will be musical and dancing shows, concerts and gala evenings. The penultimate Monday, before the Fat Tuesday, an appointment with the Trouilles de Nouille; some masked and costumed groups pick up a person without a costume, to take her to a cafe, or to a street in the center, and make jokes about him or her. Binche is a small Belgian town, about 32.000 inhabitants, in the Walloon province of Hainaut, not far from Charleroi. The best method to reach the town, and to attend the wonderful Binche Carnival is, without a doubt, the plane.

Charleroi airport It is located only 32 kilometers from the city, and is well connected to the main European destinations. From the airport, you can also reach Binche by public transport. From South Charleroi, change at La Louviere-Sud and arrive at your destination. Obviously, directly at the airport, it is possible to rent a car.

Appointment with the Gilles, the Peasants, the Pierrot and the Harlequin who will wear a fancy costume, imagined in the smallest details and prepared in the utmost secrecy. You will be able to admire their beauty and originality, while parading in small groups to the sound of the drum and the viola.

At Eugène Derbaix Square, near the station, appointment for the Sunday procession. Accompanied by drums and brass, the bands join Wanderpepen Avenue and eventually divide into Charles Deliège Avenue. At the end of the procession, the companies continue to walk the streets playing music until late in the evening.

The Binche Carnival Day dedicated to young people and children.

From the 10:00, the Youths come out in groups, accompanied by violas, walking the streets of the city, and dancing all morning.

At 11.00, the spectacular confetti battles, organized in the center.

At the 15:00, near the Grand Place, people are offered oranges. All the children in costume come together to form the “rondo of friendship”. At 19:00, fireworks shows and fireworks.

The Binche Carnival comes alive. It is the day when you can see the Gilles in the city. Most of the time, Gille’s arrival at home is accompanied by a pipe or a clarinet melody. From the 08.30 the companies of Gilles, peasants, Arlecchino and Pierrot, meet in the Grand Place.

At 15.00, departure of the procession from Battignies crossings. The parade, accompanied by percussions and music, parades through Charles Deliège Street to then reach the Grand-Place. During the procession, participants offer their oranges.

At the 20.00, following the same afternoon path, there is the night procession. Towards the 21.00 approximately, grand finale of the Binche Carnival with fireworks. The festivities will continue, all night long, before dawn, with dancing and singing.

Binche is a small town, and as such, with a very limited supply of accommodation. It is practically impossible to find free accommodations during the Binche Carnival period. Easier to find solutions in La Louviére, just 7 kilometers away, or Fayt-lez-Manage, about 10 kilometers.

From this link, all the best accommodation offers for Binche and surroundings.

*All contents are purely indicative. Before attending the event, please consult the official website. Timetable and schedule may be changed based on current COVID-19 regulations in Belgium. We also remind you to inform yourself in advance about the mandatory nature of the vaccine, green pass and swab. 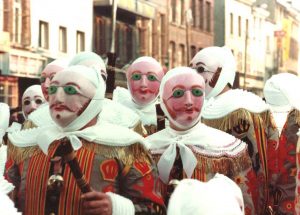 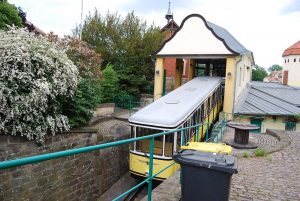