Getting around London by public transport, metro, bus, taxi, on foot. Guide

Getting around London is simple. Thanks to its underground (Tube), London is divided into different zones, identified from 1 to 9. The metro connects the city and all the agglomerations in a widespread way, and is, without doubt, the best way to get around London. The iconic London buses are known all over the world, and represent an excellent solution for short trips.

Here are some valuable information for getting around London by public transport, on foot or by taxi.

Visiting the London capital, you will discover how pleasant it is to stroll among its main points of interest. The city, and the attractions, are so many that you will move very easily from one point to another. With the necessary precautions and taking many breaks.

GETTING AROUND LONDON BY METRO

With 11 lines, around 270 stations, and over 400 kilometers of extension, the London Underground is among the largest in the world. Every day it is used by about 5 million passengers! The huge London underground network is legendary, subdivided into different areas.
The network is divided into 9 different zones. In all likelihood you will not move beyond the first 6 zones. Of these, zone 1 and some stations south of the Thames is the most central, served by the Circle Line. From area 7 onwards, areas outside of Greater London belong, after Moor Park. They are served exclusively by the Metropolitan Line (Magenta).

The Metropolitan line was the first to be built, inaugurated in 1863. The main part of the route runs from Aldgate station, in the City of London, to Amersham, with branches to Uxbridge, Watford and Chesham. Part of the original route, today, is served by other metro lines. The last line to be inaugurated was the Jubilee Line (gray) which, since 1979, has been connecting Stanmore and Stratford.

The metro is active every day of the year, including holidays, from 05:00 am to 01:00 am at night. You can move easily by metro even in the late evening. From Friday 19 August 2016, the London Night Tube was officially inaugurated. Every Friday and Saturday, the two lines Central and Victoria will remain open all night, from 00.30 to 5.30; there will be six trains an hour passing through London Central.

The metro is particularly crowded, especially at peak times. Often, you may have to wait for a couple of trains to pass before arriving at your destination. If you need to make short trips, the bus is preferable. For medium to long distance distances, the meter is the best solution. To find your way around London on the metro, always use the appropriate maps, very clear and practical. You can hardly be wrong. There are also numerous useful apps on Google Play and iOS.

GETTING AROUND LONDON BY BUS

The legendary red double-decker buses that go around the capital are part of the collective imagination. The buses are not just a fascinating and evocative means of getting around London; they are also extremely comfortable for shorter distances, much used by Londoners.

The buses are cheaper than the metro, and more comfortable in short distances. They are ideal within 5/6 stops. Virtually all areas of London have a bus stop. There are as many as 700 bus lines, in service every day, from morning to evening. Some lines, identified by the letter N, perform night service. Please note that it is no longer possible to pay for the ticket on the bus. You must buy one in advance, or use an Oyster Card or the appropriate Passes.

Daytime lines generally operate from 05:30 to 00:30. All the buses will always have the route number on the front and rear of the vehicle clearly identified. Some lines carry out continuous service 24 hours a day.

After midnight, until 06:00 am, the night service is in operation, with over 100 lines active all over the territory! In general, they are identified by the letter N, and almost always follow the same path of the relative day line. The frequency, at night, is 30′. Tickets have no surcharge. If you use a subscription, it will be valid until 04:00 in the morning! 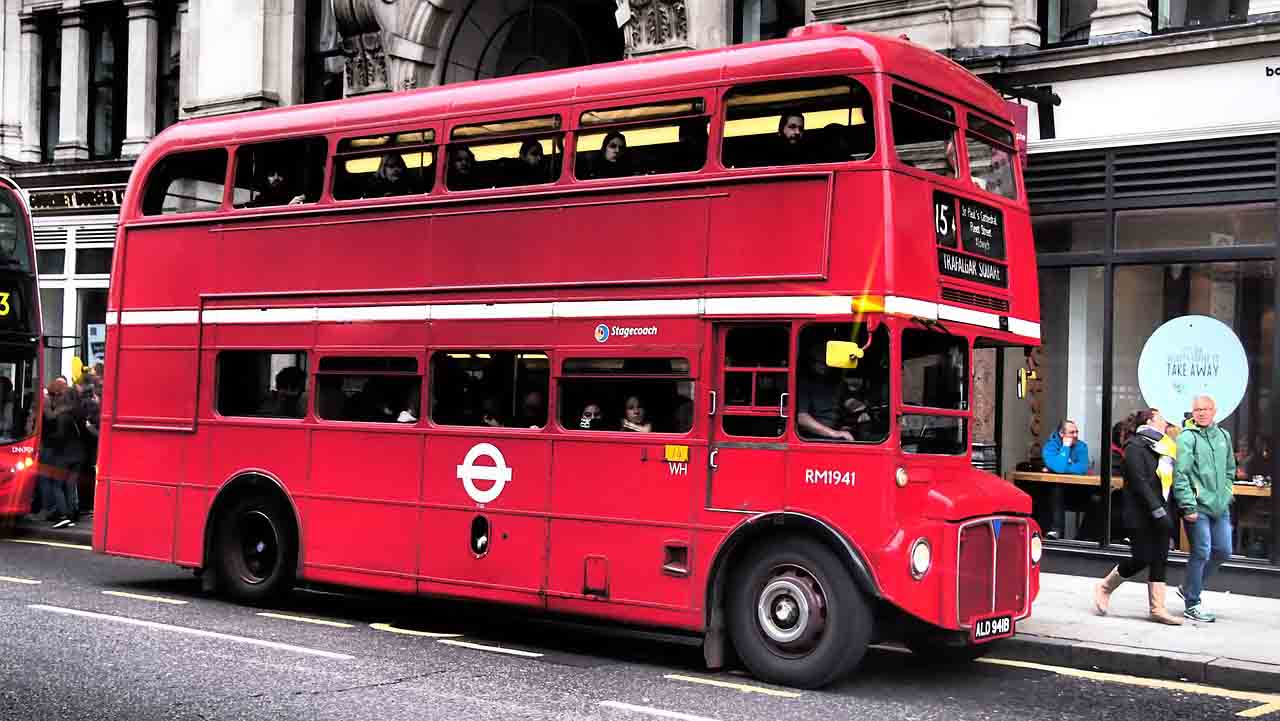 Getting around London by taxi is really expensive. In the city you will find the typical Black Cabs, the only official London taxis. Minicabs are an alternative and cheaper solution for long journeys (for example from an airport to the center).

The yellow TAXI light on indicates that the vehicle is available. You pay for distance and minutes, with a base price of 2.4 pounds upwards. Absolutely avoid traveling by taxi in central London, especially during peak times, with traffic paralyzing the city.