Lights. Colors. Sounds. Rhythm.
Raise your hand if you have not fantasized, at least once in your life, on the Rio de Janeiro Carnival.
One of the most famous and important events in the world, which transforms the whole city into an immense samba track. This is the Carnival par excellence. The most incredible, spectacular, and extravagant party in the world.
The event to which everyone should participate, at least once in their life.

You can have fun, and unleash yourself, with dancing and wild music, highly contagious.
Between unique and incredible choreographies and sparkling costumes, often over the top.
A show of which, great protagonists, are the sumptuous parades and, of course, the seductive dancers, whose movements are famous all over the world.
Without forgetting, of course, dancers, Drag Queen …

Because, the Rio Carnival is also an extraordinary feast of aggregation and tolerance for all the communities. Straight. Gay. Lesbos. Transsexual. All ready to throw themselves into the fray, and to have fun on the streets and in the clubs. Between official events, and impromptu parties. Every day, at all hours.
Street parties are, of course, the most beautiful and enthralling. Totally free, follow more or less predetermined routes, increasing in number, thanks to new participants who join the party. No network, or barrier, between the public and the parade. You simply have to dive into the crowd, between dancers and semi-nude dancers, to the rhythm of samba.

And then there is, obviously, the Sambodromo, the Rio Carnival stadium that hosts tens of thousands of spectators.

This could be the perfect time to learn how to dance the samba, learn about the local culture, and relax on a wonderful beach. You are still in Rio de Janeiro! 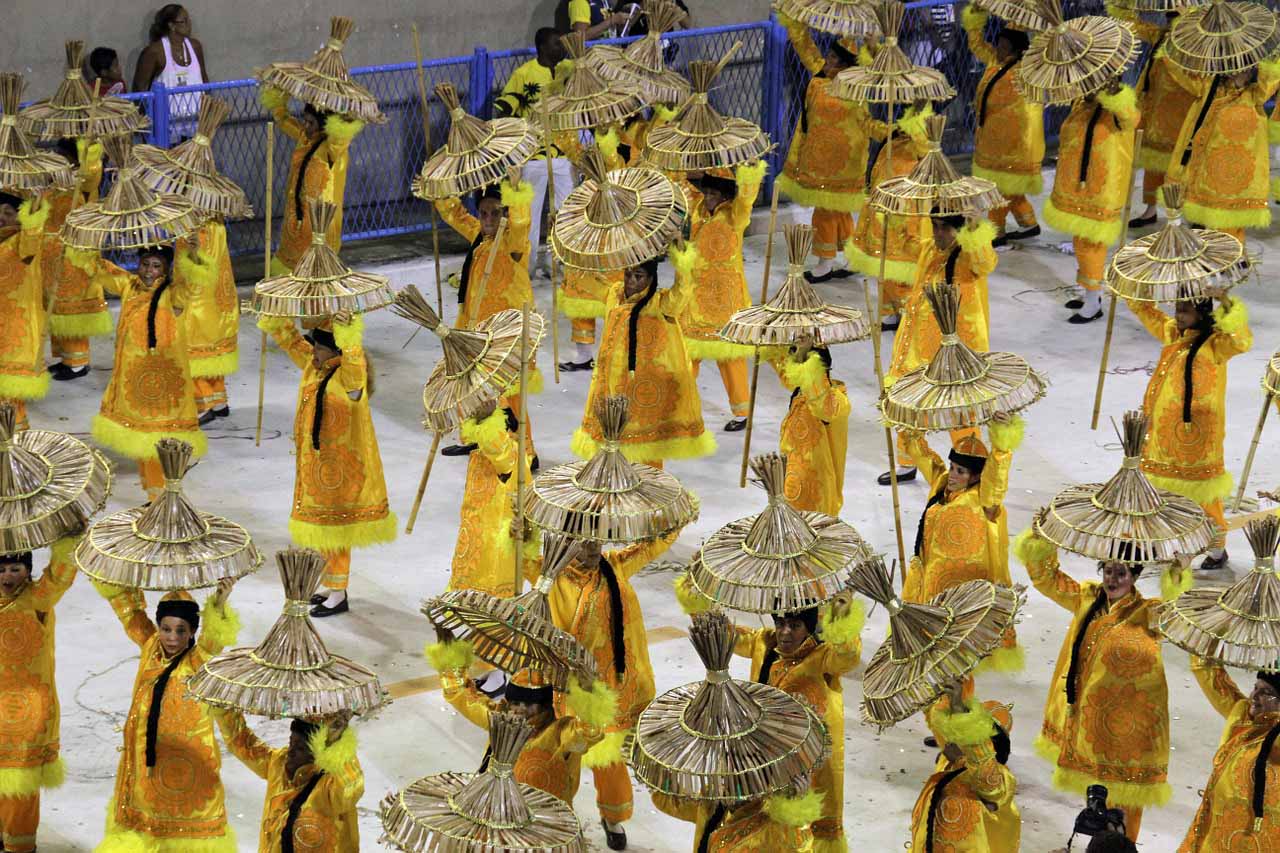 The international airport of Rio de Janeiro – Galeao, is located less than 20 km from the center. You can move easily by bus and public transport.

Events, more or less official, take place throughout Rio. You can easily get there on foot and with convenient public transport.
Il Sambadrome, is the official site of the Rio Carnival Parade. In operation all year round, it is located at R. Marquês de Sapucaí – Santo Cristo, Rio de Janeiro.
From here, numerous bus lines operate.
The train station Central Do Brasil, it is about 1,2 km away. Nearby, there is the Tram Tram stop L2, VLT-Central.

Here are the main events of the Rio de Janeiro Carnival, with dates, times and any tickets

The Sambodromo hosts the Samba Parade, that is, the sumptuous parades organized by the Carioca dance schools. A real competition between 12 dance schools, for four dates. The official competition is divided into seven divisions. Each school performs for 80 minutes. In the end, the school for the best annual performance will be awarded.
Appointment on 21 and 22 with the Preliminary Parades. On 23 and 24, however, there will be the main parades. Saturday 29 February there will be the Champions Parade. On February 25, however, from 19:00, the little ones will perform with the Parade of the Children’s schools.

To attend the event, you must purchase the entrance ticket.
The price varies depending on the date and, above all, on the sector.
The cheapest prices are for the steps. Almost all numbered, they have a starting price of 34$. The seats are located in the 12 and 13 sectors, with prices from 134$. Obviously, prices increase, and even vertiginously, moving from the sector, even exceeding the $1000.
Then there are the VIP areas that require particular economic efforts. Often, you will find famous people from the country’s political and social life. Even appropriate clothing is required.
Tickets tend to wear out easily, which is why it is advisable to buy them well in advance.

Balli. Do you sing. Dances. Sensual dancers. Street parties are a bomb of energy
You can live them throughout the period, especially on Sunday and Monday of the Carnival.
Of parties, sometimes improvised, you will find hundreds of them all over Rio de Janeiro.

The best street parties are those organized by BLOCKS and by BANDS.
They march through predetermined paths, growing from minute to minute, with new participants met during the journey.
The parties organized by Bafo do Onca e Cacique de Ramos, during the Rio Carnival, they are considered an institution.

Banda de Ipanema, instead, it is the true icon of the Rio Carnival. For many, his parties are the best in Rio. The great procession starts from General Osorio Park at 16:00; then, it continues along Vieira Souto Avenue and Rua Visconde de Piraja, before returning to the starting point. 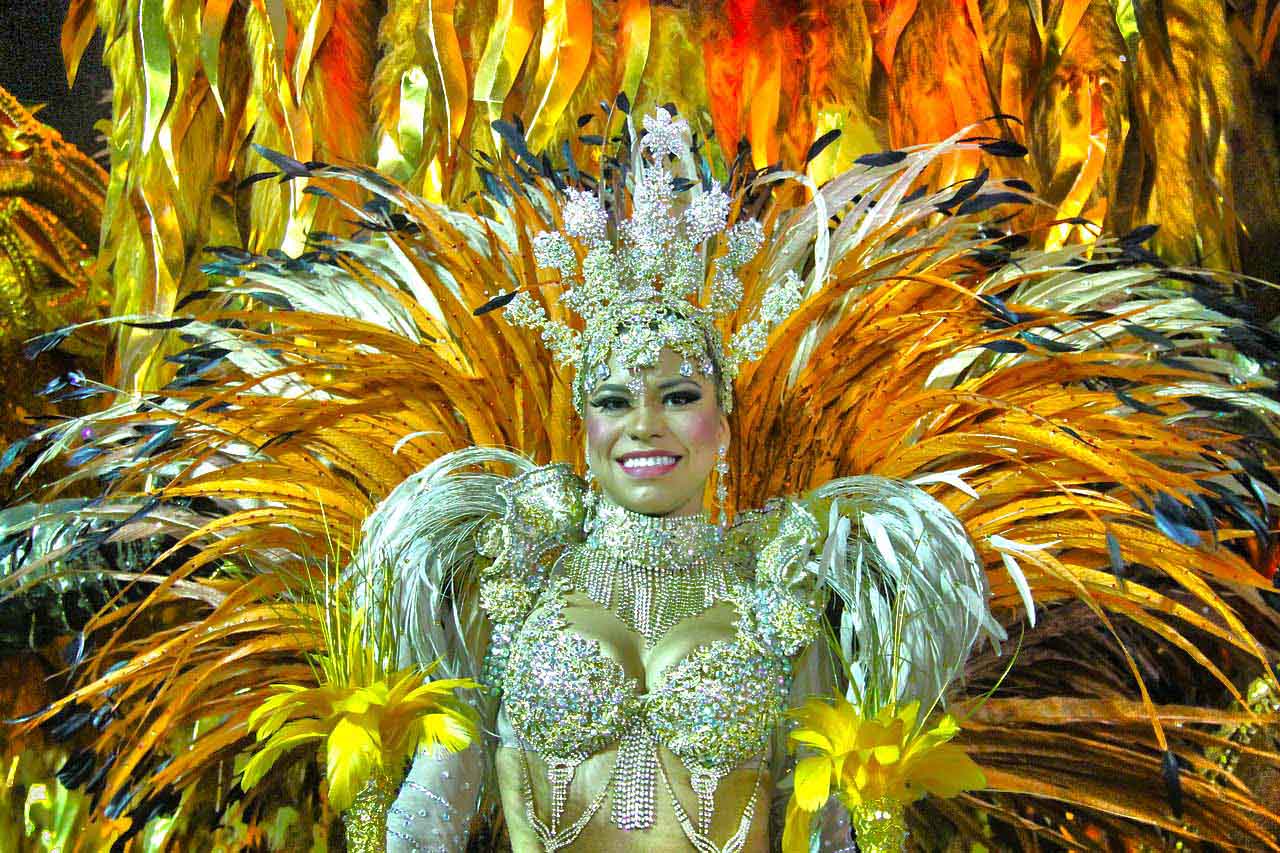 These are the most elegant and luxurious festivals of the Rio Carnival, organized in the most prestigious hotels in the city. They are also particularly expensive.
Among the most famous parties, the Magic Ball al Copacabana.
For those who do not want to spend crazy figures, we recommend the Scala night club that organizes 6 different parties, for all tastes